This is a short list of our most frequently asked questions. For more information about HENRUITECH, or if you need support, please visit our support center. We’re looking forward to get an interesting business dialogue with you.

What is a vaporizer?

A Vaporizer is a device used to release the active ingredients of your blends or oils/concentrates without combustion (which creates smoke). This is achieved through either Conduction or Convection (see below).

How is vaporizing healthier than smoking?

Instead of burning the material, your product is heated at a much lower temperature. This allows one to receive all of the benefits that blends have to offer without the carcinogens and other nasty by-products that are released during combustion (smoking).

How do I know which vaporizer is best for my needs?

Do you want a portable or desktop unit? Digital or Non-Digital? It’s based on different smoking habits.

What’s the difference between Conduction and Convection?

Do vaporizers make any noise?

Most vaporizers make no sound at all. However, some of the forced-air units (Volcano, Extreme Q, etc.) will make a light fan noise when the balloons are being filled or air is passing through the whip.

Why am I not seeing any smoke?

Why aren’t my blends turning to ash?

Your blends should never turn to ash while vaporizing. Since you are heating the blends at a much lower temperature than smoking, you are avoiding the point of combustion which normally turn your blends into ash. Instead, you are extracting the key elements from your blends without actually burning them.

Why won’t my pen vaporizer heat up? Is it locked?

Most pen vaporizers come with a lock mechanism. This is utilized so that your unit doesn’t unintentionally heat up while in your pocket or purse. To unlock/lock, simply press the button 3-5 times in rapid succession.

Will I get bigger clouds of vapor if I turn up the temperature?

Turning up the heating temperature will typically produce more noticeable and bigger clouds of vapor.

What is the perfect temperature for vaporization?

It really depends on the vaporizer. However, the optimum temperature range for most vaporizers is somewhere within 335 to 385 degrees Fahrenheit. 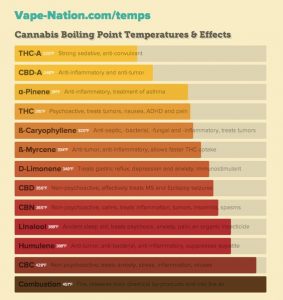 How long does it take for the vaporizer to heat up?

It really depends on the vaporizer. Some vaporizers take 3-4 minutes to reach vaporizing temperatures, whereas some units can heat up in 10 seconds!

Do I need to grind my blends before vaporizing?

Definitely. Grinding your blend allows for more efficient vaporization because it increases the surface area of your blends and allows hot air to pass through much more effectively.

The interactive diagrams below will guide you through the process of vaporization using three common types of vaporizers: Standard Vaporizers, Portable Vaporizers, and Forced Air Vaporizers. Standard Vaporizers typically utilize a ceramic heating element and require the user to pull hot air over the herbs through a whip attachment, allowing the user to maintain maximum control over the vaporizing process. Portable Vaporizers are exactly that – portable. These compact and lightweight vaporizers are made for vapor enthusiasts on the go. Portable Vaporizers can be used almost anywhere and are very simple to operate. Forced-Air Vaporizers represent the new wave of Vaporizers. These high-quality Vaporizers utilize a Forced-Air system, which is quite simply an internal fan that propels hot air over your herbs.

Standard Vaporizers, also referred to as “Box Vaporizers” or “Whip-Style” Vaporizers, typically utilize a ceramic heating element and require the user to inhale through the tubing. This inhalation creates a convection current, pulling hot air over the herbs, allowing the user to maintain maximum control over the vaporizing process. Many standard vaporizers employ what is known as “hands-free” design, which means that the herb container at the end of the wand rests independently on the heating element without the need for the user to keep his or her hand close to the heating element in order to ensure heating of the herbs. 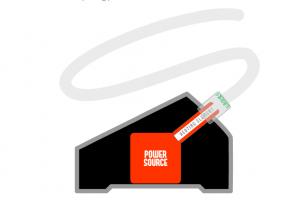 Portable Vaporizers, or “handheld vaporizers”, are exactly that — portable. These compact and lightweight vaporizers are designed for vapor enthusiasts on the go. Portable vaporizers can be used almost anywhere and are very simple to operate. They typically employ an internal rechargeable battery, an external “push-in” battery or a refillable butane chamber with click-activation.

Pen-Style Vaporizers represent the new wave of vaporizers. They are a type of handheld vaporizer which is growing in popularity due to their aesthetic simplicity and similarity to a common “e-cigarette”. Vaporizer pens are optimal for enjoying e-liquids, essential oils, and concentrates. Vaporizer pens are much more subtle and discreet than their larger portable counterparts; they generate vapor by heating material inside one of the following containers:

Atomizer — A chamber containing a small heating coil that creates convection current, vaporizing the active ingredients in the oil or herb cartridge.

Cartomizer — This is a combination of a cartridge and atomizer. In this setup, a conduction current occurs because the material is in direct contact with the heating coil. 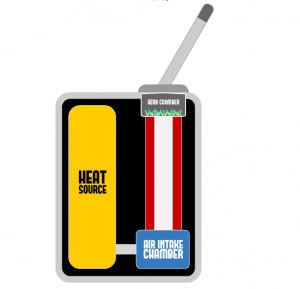 What is a Vaporizer?

Before delving into the finer points of portable vaporization, it’s best to gain a broader understanding of vaporizing in general. A vaporizer is a device that allows you to enjoy the benefits of herbs without the harmful byproducts. Instead of igniting herbs with a lighter, dry material is heated below the point of combustion, which allows the active ingredients to be released in the form of vapor. Vaporizers come in many forms, and while the end result is more or less the same, the way in which different types of vaporizers function can vary greatly.

It’s no secret that the act of smoking is very harmful and does irreversible damage to the lungs and respiratory system. By eliminating smoke from the equation, vaporizers present a phenomenal health-conscious solution to medicating – greatly reducing the amount of toxins, irritants and carcinogens inhaled. In addition to the obvious health benefits, vaporizers are also incredibly efficient, and will help you conserve your herbs and save money in the long run. The amount of dry material needed for an effective vaporization session is minimal, and because it’s being slowly cooked instead of flash heated, the session will last longer and you’ll get more out of your herbs.

How Do Portable Vaporizers Work?

Unlike pen-style units that burn material by conduction, portable vaporizers are just that – actual vaporizers – which essentially “cook” loaded material through convection (oftentimes combined with a small element of conduction). Since the packed material never comes into direct contact with the heating element, very little combustion takes place, resulting in true vapor and minimal smoke.

The heating chamber (also referred to as an herb chamber or oven) is the area of the vaporizer in which dry blends are packed. Heating chambers can be constructed from many different materials, including stainless steel, ceramic or even glass. The material from which the chamber is constructed from will ultimately have an effect on the taste and consistency of the vapor produced.

When packing herbs into the chamber, it’s best to finely grind your dry material, packing the chamber full – but not tight. Leaving the pack loose enough allows air to flow freely through the herbs and heat them evenly.

Now that the chamber is packed full of green goodness, it’s time to set your vape to the optimal temperature. Heat settings differ from unit to unit, but for the most part, they usually fall between 300° – 400°F. Depending on the device, there can be as few as one preset optimized heat setting, or upwards to ten on more advanced units. While many (perhaps most) portables come equipped with several different heat settings (usually signified by different colored LED lights), there are many units nowadays that offer precise digital temperature control, allowing for a finely tailored vaporization experience.

A few different factors should be taken into account when deciding on what temperature at which to vaporize. Lower temperatures are associated with light vapor, and are ideal for herbs with low moisture levels. At lower temperatures, vapor clouds won’t be as large or pronounced, but the effects will still be felt.

Alternatively, higher temperatures will produce thicker, hotter vapor, and are recommended for herbs with higher moisture levels. Vapor clouds produced between 375° – 400°F will be larger and more robust. However, the closer to 400°F you get, the higher the risk of combustion, so a general rule of thumb is to stay in the neighborhood of 350° – 375°. Vaporizing within this temperature range will give you the best results. 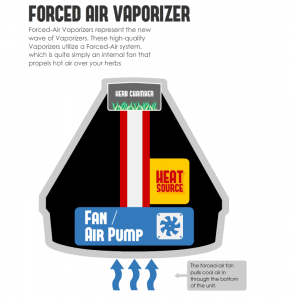